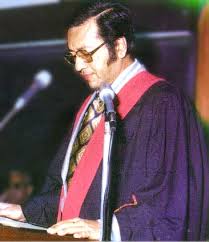 PETALING JAYA, Feb 1 — Datuk Seri Anwar Ibrahim maintained today that he was not part of “Project IC” and insisted that his accuser, Tun Dr Mahathir Mohamad, had engineered the operation that enfranchised immigrants to vote for Barisan Nasional.

Yesterday, the former prime minister claimed that Anwar (picture), then his deputy, had been involved in the issuance of identity cards to illegal immigrants in Sabah without his knowledge but admitted that he had no evidence to prove it.

“There should be a thorough investigation on this matter and they should ask the Cabinet of that time.

“The matter was never raised, it was not mentioned in the meeting minutes, there was never a record because this was a special operation handled by the prime minister,” Anwar, now the opposition and PKR’s de facto leader, told a press conference at the party’s headquarters here.

Former National Registration Department director Ramli Kamarudin recently told the ongoing Royal Commission of Inquiry (RCI) on the Sabah immigrant crisis that he was ordered by Megat Junid to issue receipts to enable illegal immigrants to vote in the 1994 Sabah state election.

Ramli claimed he was instructed to ensure the NRD receipts were to match the names and IC numbers of registered voters.

About 200 receipts each were issued in five or six state constituencies in Sabah considered “black spots that were difficult for the government to win”, the commission was told.

Dr Mahathir, the country’s longest serving prime minister who was in power from 1981 to 2003, has been accused of spearheading the so-called “Project IC”, in which citizenship was allegedly given to immigrants in exchange for their votes.

He has denied the allegations, saying the ICs were issued according to the law.

Yesterday, the former premier, who still wields a clout, said he had only realised of the wrongdoings following testimonies made at the RCI, adding that Anwar had been directly involved.

“(Anwar) had a hand, but in the IC project what happens on the ground isn’t always what the directives are all about,” Dr Mahathir said.

“What they do on the ground is sometimes different from the instructions that are given.”
Anwar, however, said today the onus was on Dr Mahathir as well as his successors, Tun Abdullah Ahmad Badawi and Najib, to explain as the project had allegedly continued until last year.

“Ask Najib and Abdullah because the project continued until last year,” he said.
“Can he (Dr Mahathir) admit that he had appointed Aziz and Megat Junid as they had reported directly to him?” charged the former deputy prime minister.
The PKR chief said he was ready to testify at the RCI to assist in the investigations.